King of the Castle!

I took Zane to Michael's a while back because I needed something for a project I was working on.  When we go there he usually ends up conning me into getting something.  This time we saw these adorable little wooden unfinished lighthouses and right beside was this little bag of decorative shells we thought we could paint the lighthouse and glue some shells on...that is until we got looking around the store a little bit more.  In the section with all the wooden unfinished things, he found something that made him so excited he was dancing around and squealing like I have never seen before!

Even I had to agree with him that this is a pretty fantastic wooden unfinished fold up castle!  Normally I wouldn't pay the 29.99 it was tagged at, but of course I had a couple coupons that made it end up costing 13.95!  Perfect!  When we got home with it he was so excited to show his dad he was swinging it around and just beaming!  (His old man whispered to me that it is the equivalent of a dollhouse for boys which is so true but don't let Zane hear that!)

So on the weekend we took it with us to Grandma and Grandpa's house because we knew he would need something to fill all kinds of time.  And he did exactly that!  He must have spent a solid 4 hours over 2 days working on this thing!  He was ever so careful with it.  He drew a blueprint before hand of what he wanted it to look like when he was done and stuck pretty close to it!  Here are some pics of the process! 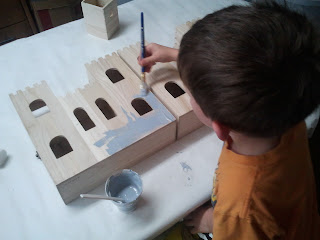 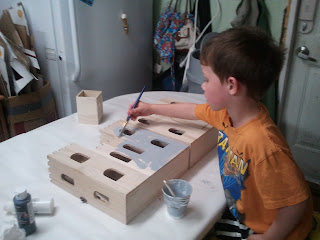 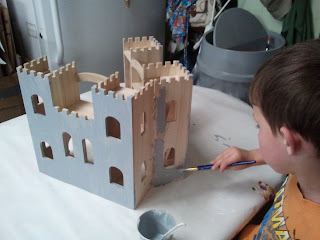 Staying at the cabin at the lake is fantastic.  The best part is eating whatever I feel like for every meal.  Case in point...bush pies for breakfast!  We made some with peanut butter and blueberry jam, some with just jam, some havarti grilled cheese, and (the best of all) Smores ones made with Nutella and marshmallows!  Sooooo good!! 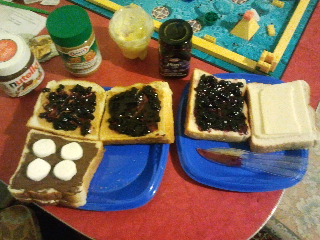 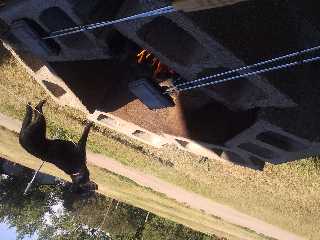